Recent headlines trumpeted the news that Canada has banned shark fins. Too good to be true? Well, it would appear that the devil is in the detail…

Although I applaud the Canadian government’s most recent action to protect sharks, which largely resulted from years of unwavering effort by people and organisations dedicated to animal welfare across the country, I fail to see how Bill C-68¹ can be interpreted as an effective means to reduce the availability of shark fins in Canada. True, this first important step by Ottawa to defeat the illegal fin trade is a significant accomplishment to be celebrated, but it nonetheless falls short of what is truly needed to save sharks, and the catch is hidden in plain sight.

If less rigorous reporters had actually read the succinct clause (18.1) related to sharks, they would have immediately realized that only fins not attached to a shark’s carcass have been banned, i.e. there is no interdiction on importing or exporting entire specimens of most shark species with fins attached. Triumphant headlines stating that importing or exporting fins have been banned are thus misleading since shark fins will likely remain available and perfectly legal throughout the country for years to come.

“Canada has outlawed the practice of cutting fins off domestic sharks since 1994, but it did not have legislation to prohibit people from bringing fins into the country.” — Global News

Again, this is only partly true. You can still bring fins into the country under the amended law, as long as they remain attached to the shark.

This leads me to ponder a few questions:

[1] Once the intact shark carcass has been imported by a law-abiding Canadian, what is to prevent the distributor from selling the fins separately much like the current supply chain has always operated?

[2] How will the shop keeper, or even the distributor, demonstrate to clients that all of the stock on offer came from sharks that were imported whole to Canada, and that none of the fins came from the black market?

[3] How will government inspectors be able to verify the origin of severed shark fins once they are on display?

[4] What about ‘Canadian’ sharks? The shark fin clause only pertains to international imports and exports. What if the fins are obtained from a domestic² fishery or even a shark derby in Canada where finning is illegal? Do they have to be purchased with the rest of the shark, and is there any way to distinguish them from imported fins of dubious origin?

“… in a move advocates hailed as a major win for preserving ocean populations.” — Global News

Notwithstanding this milestone achievement, for which limited public interest has sadly already peaked, sharks will continue to be slaughtered by the tens of millions every year, but instead of retaining only the fins and tossing the dead or dying shark overboard, the appendages destined to the lucrative Canadian market will simply be removed after the shark has crossed the border, still intact. Sure, it will cost more to import entire sharks to sell their fins, but part of the increase will be offset by transforming the rest of the shark into dog food or other byproducts. So just how is this “a major win for preserving ocean populations?” 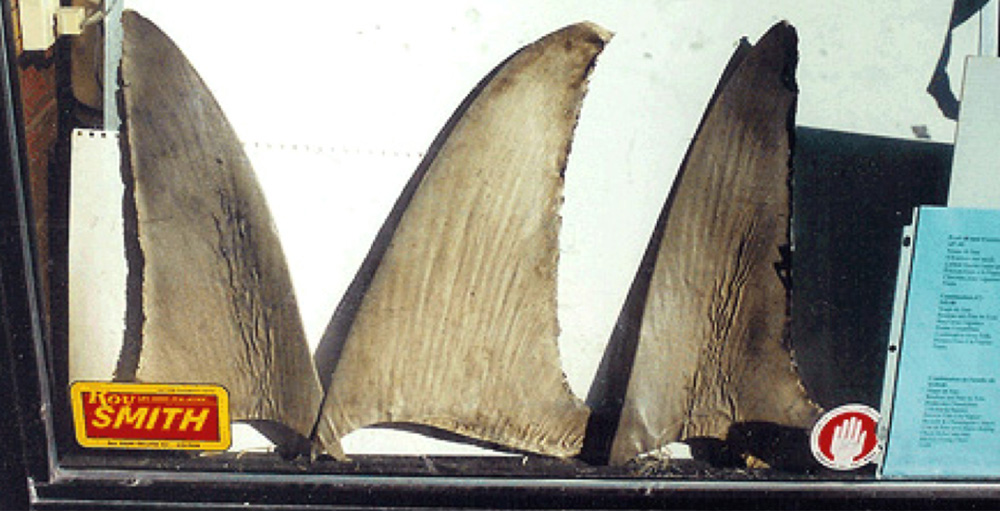 Shark fins in a storefront window in Montreal in the 1997. You can no longer see them displayed so prominently but they are still available at several shops. Photo © Jeffrey Gallant | GEERG

Sharks at a fish market in Hong Kong. Photo by screenpunk (CC BY-NC 2.0) 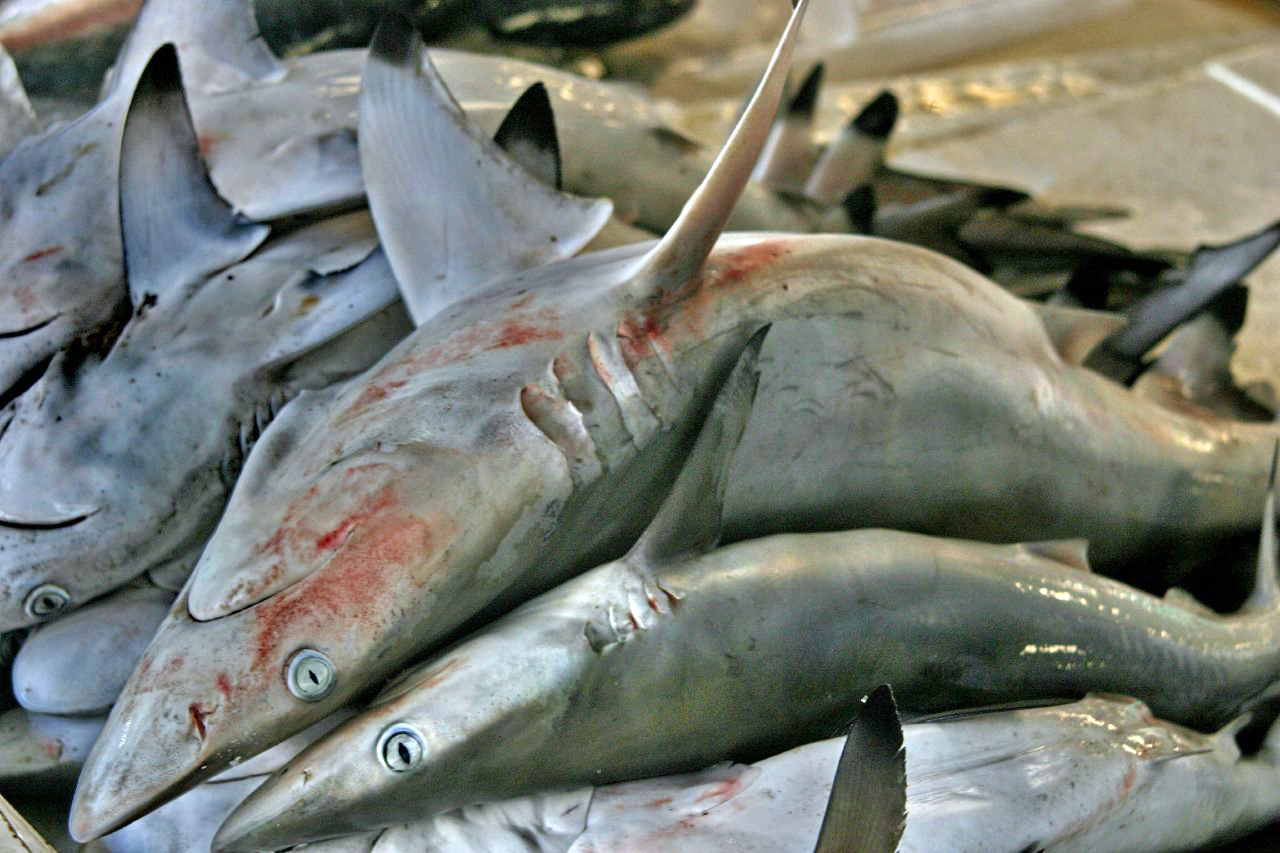 Sharks with fins attached at a fish market in Dubai. Photo by Roberto Saltori (CC BY-NC 2.0)

Shark finning was banned in Canada in 1994, and yet we found a finned Greenland shark at our study site in Baie-Comeau a decade later in 2004. Photo © Jeffrey Gallant | GEERG

Requiem for the tiny, spiny dogfish, or how this law may unintentionally be detrimental to the survival of small or juvenile sharks.

When I last saw shark fins in Montreal food markets, they sold for as much as $580 CAD a pound ($1,279 per kg). Well, a pound is a pound, no matter what species it came from, and there are a lot of small-sized and easy-to-import intact sharks still left to be caught, including the world’s most plentiful but rapidly declining³ species, the spiny dogfish.

In theory, Bill C-68 could potentially reduce the amount of sharks being brutally finned, and help save mature large-bodied sharks that will no longer be cost-effective for import to Canada due to their size. But in practice, unscrupulous fishers may simply continue to slice off the fins of large sharks for the illegal trade, and then compensate for their losses by retaining even larger numbers of more easily exportable small-bodied or immature intact sharks before they ever get a chance to reach adulthood and reproduce.

On the plus side—and it’s a biggie—the amended law should protect threatened and endangered sharks under CITES4, since determining the species of whole sharks is much simpler than identifying bits and pieces.

Finally, and correct me if I’m wrong, but Bill C-68 does not appear to have any provisions concerning the precise origin of an imported shark. Does it matter that it was obtained from a government-sanctioned sustainable fishery, or that it was poached from a restricted area or nature preserve?

When I petitioned the National Assembly of Quebec to help protect sharks in 2013, and because a Canadian province cannot outright ban food items, I asked the government to create an eco-certification programme that would have positively labeled all shark fins obtained from a sustainable source. Shark fins imported without documentation and thus offered without the eco-label would have remained available, but shop keepers and consumers would have been able to knowingly and conscientiously choose an environmentally-responsible alternative to the illegal fin trade. Not surprisingly, my petition was turned down under the contention that food matters fall under federal jurisdiction, which is—as far as Quebec is concerned—false. Much in the same way the Quebec government has fiddled with the possibility of labeling all GMO foods in the province, lawmakers are fully entitled under the Quebec Food Products Act (P-29, 1981) to require more precise or stricter labeling of any product sold in the province, including the origin of shark fins, be they domestic or imported.

“If the sole condition for legally purchasing ivory were to import the entire walrus or elephant, someone would still do it, find a profitable way to dispose of the carcass, and make a fortune. And so may be the fate of sharks and their prized fins destined to the Canadian market.” — Jeffrey Gallant, GEERG

Despite the significant and far-reaching impact of highly successful documentary films and anti-finning campaigns such as those led by the late Rob Stewart, shark fins remain a lucrative commodity for tradespeople. So, as much as I admire the noble and concerted effort put in by everyone involved in the passing of this newly amended law, I still think that it lacks the powerful bite needed to convince anyone in the fin business to close shop. 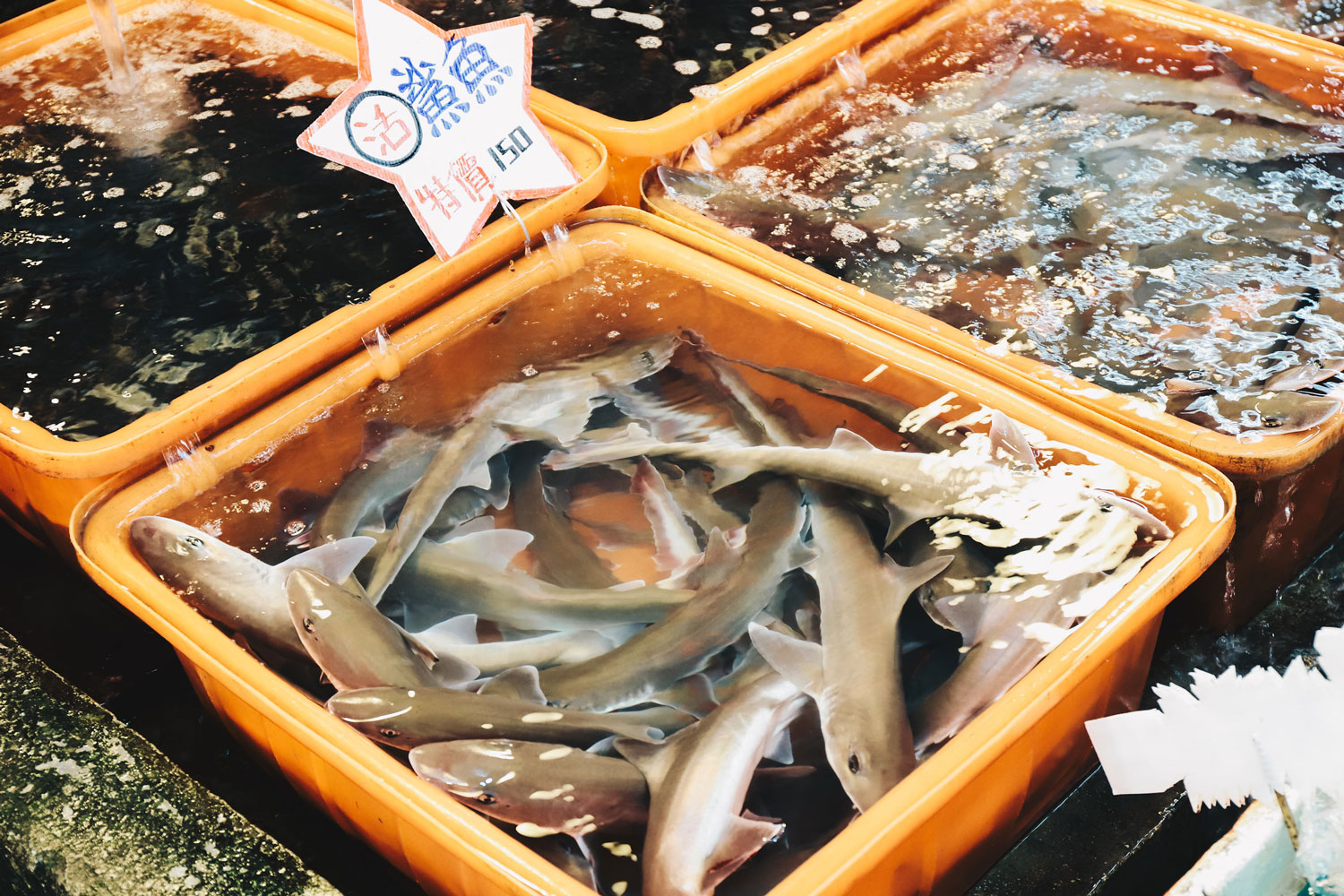 Small sharks with fins attached at a fish market in Taiwan. Photo by waychen_c (CC BY-NC-ND 2.0) 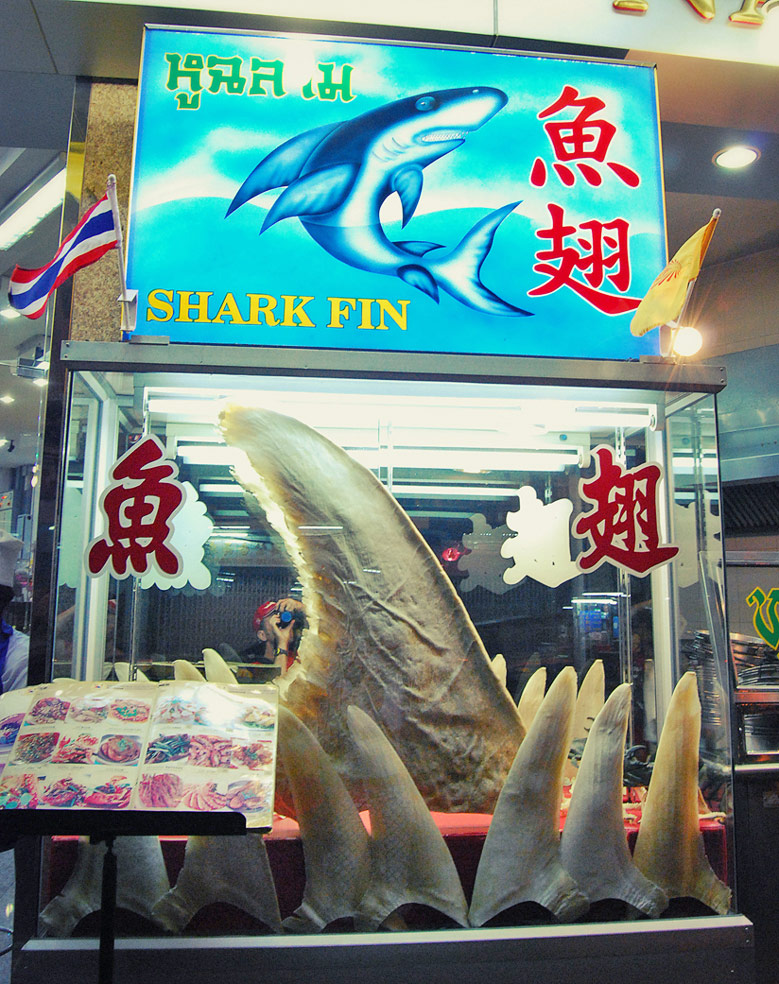 Too little, too late?

I am by no means unappreciative of the collective effort of the government, shark advocates and passionate individuals for effecting positive change for sharks, but I nonetheless believe that laws which depend in part on the good nature of greedy or even decent—but desperate—people are doomed to fail.

Unless a law can effectively restrict the potential for corruption via an international treaty or government-enforced food trade management and accountability, i.e. verifiable eco-certification or a politically unpalatable total fin ban, sharks will continue to perish at an unsustainable rate until it is too late.

Sharks at a fish market in Yemen. Photo by Rod Waddington (CC BY-SA 2.0)

Jeffrey Gallant, M.Sc., is the Scientific Director of the Greenland Shark and Elasmobranch Education and Research Group (GEERG). He is also the Editor-in-Chief of the Diving Almanac & Book of Records, and a contributing editor of DIVER Magazine. Jeffrey dove with his first shark, a spiny dogfish, off Halifax (Nova Scotia) in 1991.